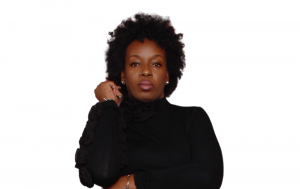 USA Fibroid Centers is proud to announce that Coach Ella has been named a fibroid ambassador.

NORTHBROOK, IL, UNITED STATES, August 2, 2021 /EINPresswire.com/ — USA Fibroid Centers is proud to announce that Life Coach Ella Destiny has been named a USA Fibroid Ambassador. Destiny, like many Black women, began having fibroid symptoms in her late teens. According to national estimates, almost a quarter of Black women between the ages of 18 and 30 have fibroids. Black women are also more than twice as likely to have recurring fibroids or suffer from complications.

“It’s important to tell my fibroid story to help other women because when you look at me, you don’t see that I had 11 abdominal surgeries,” said Destiny. The inspirational coach’s fibroid journey served as motivation for writing her best-selling book, “There’s Nothing Wrong with Saying So What”.

Destiny needed numerous blood transfusions during her teen years because her menstrual flow was so heavy it made her anemic. “You don’t hear about teenage girls having fibroids,” Destiny. “When I finally went to one OB/GYN, he told my mom I had multiple fibroids and they were large.” The only treatment Destiny was offered was a hysterectomy.

“Awareness about fibroids for young people is needed, especially in schools and colleges,” said Yan Katsnelson, Founder and CEO of USA Fibroid Centers. Katsnelson believes that early detection can play a significant role in preventing hysterectomies. “Almost 90 percent of fibroids can be diagnosed with an ultrasound,” he added. “Young women need to know about Uterine Fibroid Embolization (UFE), a non-surgical treatment with a 95 percent success rate that preserves fertility.”

Destiny now says she wishes she knew of UFE treatment. She suffered from severe fibroid symptoms for ten years. After she gave birth to her second son, she finally underwent a partial hysterectomy at age 27. During the surgery, they severed her intestine which led to emergency surgery. “I didn’t know if I was going to make it and I panicked. What was going to happen to my children?” Destiny said. During the surgery, she coded three times resulting in her being on life support for a week.

Unfortunately, after the hysterectomy and intestinal repair, Destiny underwent numerous hernia surgeries. “They cut through all my tissues and nerves, so I don’t have any feeling in my stomach anymore,” she said. “I have a scar from hip to hip and it looks like I was cut in half.”

Destiny’s fibroid journey has made her passionate about being a Fibroid Ambassador. She believes her health problems resulted from having fibroid disease and a lack of information on treatment. “I don’t want anyone to go through what I did— it was tough both physically and mentally.”

USA Fibroid Centers has been actively striving to raise public awareness about fibroids and their impact on women's emotional well-being, family, and careers. Its ambassador program, comprised of well-known celebrities and influencers, is helping spark national conversations about these benign tumors that affect 26 million American women and cause painful symptoms.

“It’s important to break the generational taboo of that we can’t talk about this,” said Destiny. “We need to educate our young women and make them aware that there are options; you don’t have to have a hysterectomy; and you can have children.”

USA Fibroid Centers strongly supports the 2021 Stephanie Tubbs Jones Uterine Research and Education Bill that will bring $150M to the National Institutes of Health. The bill aims to provide education, improved access to care and awareness of non-surgical treatment options.

“Education and awareness are key,” said Katsnelson. “Our ambassadors are expanding the fibroid conversation to reach more women so they can recognize the symptoms and demand minimally invasive treatment options that offer a better quality of life.”