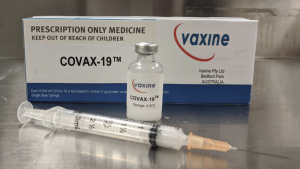 ADELAIDE, SA, AUSTRALIA, May 16, 2021 /EINPresswire.com/ — Professor Petrovsky, who is the Chairman and Research Director of Australian-based Vaxine Pty Ltd, explains that the two biggest challenges to tackling the COVID-19 pandemic are to develop a vaccine that completely prevents virus transmission something other COVID-19 have not been completely successful in achieving, and the second being to find a vaccine that protects equally against all the evolving immune-escape variants.

Professor Petrovsky has been researching coronavirus vaccines for the last 17 years, having previously published scientific papers on vaccines against both the SARS and MERS coronaviruses, which were highly protective in relevant animal models. He also recently published data from a collaboration with the US Army on development of a promising Ebola vaccine that protected mice against this most lethal disease after just a single vaccine dose. He has now successfully taken the same approach to design a protein-based vaccine against COVID-19.

Studies in a broad range of animal models including mice, hamsters, ferrets and monkeys, have recently revealed the high potential of this vaccine that is currently known as Covax-19(TM), but which likely will be soon rebranded as in its latest iteration it moves into late stage human trials in a number of countries.

Recent breakthrough data generated by Vaxine's partner, Professor Kaissar Tabynov who leads the International Center for Vaccinology at the Kazakh National Agrarian University has shown that Vaxine's unique spike protein antigen which is produced using insect cells in culture, was unique in that it not only totally protected hamsters from infection themselves but also prevented them from transmitting the virus to unvaccinated animals that were placed in the same cage two days after the vaccinated animals had been challenged with virus. Protection against transmission was not seen in hamsters given other vaccines making this finding unique to Vaxine's spike protein antigen.

This hamster data reinforced findings in hamster, ferret and monkey challenge study performed by collaborating US Universities, who showed that two doses of Vaxine's Covax-19 vaccine provided complete clearance of recoverable virus from the lungs and nose of animals when sampled just days after an infectious challenge.

"COVAX-19 vaccine has now been shown to be highly protective against the original Wuhan strain of the virus in hamster, ferret and monkey infection models performed by independent academic institutions in multiple countries, attesting to the strength of our protein-based vaccine approach", says Prof. Petrovsky.

"A key element in the success of Covax-19 vaccine is the inclusion of Vaxine's Advax adjuvant technology which acts as a turbocharger to drive an optimal immune response against the virus" explains Prof. Petrovsky who has been working on this promising vaccine adjuvant technology for the last 20 years with funding support from the US National Institutes of Health.

"We have now shown that our COVAX-19 vaccine can provide effective immunity including an ability to block nasal virus replication and this in turn successfully prevents transmission of the virus to vaccine-naïve animals," he explains.

Follow on studies to confirm and expand upon these initial findings are currently underway at several US universities as well as Kazakh National Agrarian University, with a manuscript describing some of the initial animal data currently under review at a leading vaccine journal.

In another major breakthrough the team has now developed the vaccine into a multivariant format designed to protect against all the recently described variant strains of COVID-19, with work also underway on the most recently described Indian strains.

While the data is still preliminary says Prof. Petrovsky, the immune responses to the multivalent vaccine in mice are generating equally strong antibody binding activity against all the major virus variants. “This is extremely exciting as the world desperately needs vaccines able to protect against all the new strains of the virus including the UK, South African and Brazilian strains. By contrast , the currently available vaccines are clearly not as strong against some of these variants as they are against the original Wuhan strain" he explains.

Already there have been multiple confirmed cases of vaccine breakthrough where otherwise healthy individuals who have received mRNA, adenovirus or inactivated whole virus vaccines have become infected generally with either the South African or Brazilian variants.

This problem of immune-escape will only get worse over time as more complex variants emerge which is why Vaxine has been putting all its energy into finding a robust solution to this issue before proceeding with Phase 3 clinical trials of its Covax-19 vaccine.

Dr. Petrovsky went on to conclude “Now we have a multivalent formulation of Covax-19 vaccine that is showing high promise in animal studies, we plan to work as fast as we can to advance this new vaccine formulation in human trials, while expanding manufacturing capacity to ensure we are able to produce enough vaccine to meet the enormous global demand that will be attracted by such a successful vaccine."

"To help us in this task Vaxine is looking to assemble a global network of partner organisations in countries around the world to assist Vaxine with vaccine development, clinical trials, manufacturing, distribution and sales. This is going to be a mammoth effort as we go to war against this insidious virus that continues to wreak havoc around the globe, with WHO recently predicting that the second year of the pandemic is likely to be much worse even than the first, an ominous warning for many countries that still remain poorly prepared and lacking in local vaccine manufacturing capability.

Vaxine wishes to help developing countries to establish their own local state-of-the-art vaccine manufacturing facilities, providing advice on appropriate facility design and undertaking technology transfer of its state of the art protein production technology to such facilities.

Countries in the developing world can no longer afford to sit and wait for outside organisations like COVAX to solve their vaccine supply problems, instead Vaxine proposes to help such countries find their own local solutions to the vaccine supply bottleneck for this.