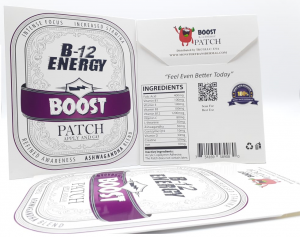 The B-12 Energy Boost + Ashwagandha (CO-Q10) transdermal patch is infused with 12 essential vitamins.

Overview
While it might feel normal to be tired after a long day at work, having a constantly low energy level might interfere with several aspects of your life.
According to reports, 45% of Americans state that they feel tired at least three times a week. Another 27% said they wake up feeling tired 4 days per week.
Numbers like these might sound alarming at first. However, when you take a look at the prevalence of nutritional deficiencies in the United States, these statistics will make sense.
In this article, we will discuss the role of B12-Ashwagandha Boost Patches in addressing issues of fatigue and lethargy, as well as the other side benefits to expect from this product.
The benefits of B12-Ashwagandha Boost Patch
B12-Ashwagandha Boost Patch contains a carefully collected combination of energy-boosting substances and anxiolytic compounds. All of these substances are 100% natural, eliminating the risk of experiencing side effects.
Let’s decipher the benefits of the primary ingredients found in B12-Ashwagandha Boost Patch:
Ashwagandha root extract
Ashwagandha is an evergreen shrub that grows in different parts of the world, including Africa, the Middle East, and India. This plant has been used for hundreds of years to treat various medical conditions.
Moreover, ashwagandha is an important element in the Ayurvedic medicine system (a practice that has been around for over 3,000 years).
Ashwagandha promotes higher energy levels in three ways:
1. Optimizes blood sugar control
Across several studies, ashwagandha showed impressive results in regulating blood sugar levels, which translates to more energy.
In a 2015 laboratory study, researchers found that this herb increases the levels of insulin and optimizes cellular sensitivity to its action. This is quite impressive because relative insulin deficiency and reduced insulin sensitivity are the hallmarks of type 2 diabetes.
When scientists conducted clinical studies on healthy individuals and diabetic patients, ashwagandha showed similar results.
2. Reduces stress and anxiety
Experts advocate for the anxiolytic (i.e., anxiety-reducing) properties of ashwagandha. In fact, some even compare its effects with a drug called lorazepam (commonly used to sedate patients).
According to one study published in the Journal of Phytomedicine, researchers found that ashwagandha exerts similar anxiolytic effects to lorazepam and other sedative drugs (e.g., benzodiazepines).
3. Relives chronic pain
Ashwagandha is a potent analgesic that inhibits the peripheral nerves from sending signals of pain to the central nervous system. Add to this the anti-inflammatory compounds found in this herb, and you got yourself the perfect recipe for inflammatory conditions (e.g., rheumatoid arthritis).
One study used ashwagandha in patients with rheumatoid arthritis and found that it reduces pain and inflammation.

Vitamin B12
Similar to ashwagandha, vitamin B12 (i.e., cobalamin) provides numerous health benefits to the body.
For instance, cobalamin is indispensable for the production of new red blood cells, which transfer oxygen to different tissues. Low levels of vitamin B12 causes a type of anemia that primarily presents with fatigue.
Researchers found that vitamin B12 boosts the basal metabolic rate (BMR), which allows your body to generate adenosine triphosphate (ATP) more efficiently.
Sufficient amounts of vitamin B12 also reduces the risk of age-related macular degeneration, improves symptoms of psychiatric disorders (i.e., depression), and prevents birth defects.
The list of vitamin B12 benefits does not end here since this compound is involved in a myriad of physiological processes.
By far, the most devastating adverse effect of vitamin B12 deficiency is birth defects since these are usually irreversible.
The effects of the other ingredients
Besides the two major ingredients in B12-Ashwagandha Boost Patch, there are other vitamins and minerals with impressive energy-boosting properties.
L-theanine – according to a recent study, researchers found that L-theanine improves signs of stress and anxiety after as soon as 15 days of intake.
The study also noted that the results were much more pronounced when intake exceeded 30 days. These results suggest that L-Theatine could be the drug of choice to control stress and anxiety that often accompany fatigue.
Creatine – By upregulating certain metabolic cascades, creatine boosts the production of ATP, mediating muscle contraction.
After taking this supplement, your cellular storage of phosphocreatine will increase, which eventually allows the myocytes (i.e., muscle cells) to produce larger amounts of ATP and contract more efficiently.
Coenzyme Q10 – the main effect of coenzyme Q10 is clear with mitochondrial diseases caused by mutations in the mitochondrial DNA. As a result, the mitochondria (i.e., the cell’s powerhouse) becomes better at producing ATP.
The magical combination of B12-Ashwagandha Boost Patch
The inclusion of every ingredient in B12-Ashwagandha Boost Patch was done after careful assessment of the interactions between different compounds and their respective synergetic effect.
Takeaway message
B12-Ashwagandha Boost Patches are a fantastic way to supplement your body with the vitamins, minerals, and antioxidants necessary for energy production.
If you are ready to make the smart move like many of our followers already have, follow this link to get your own B12-Ashwagandha Boost Patches WWW.NOMOREFATIGUE.COM

Monster Transdermal is a company developing transdermal patches to address a number of individual body ailments. They specialize in transdermal research, product design, production, and distribution. Their headquarters is in Atlanta Georgia.