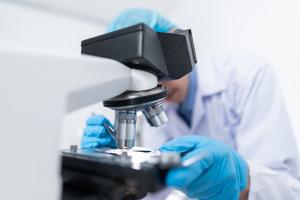 NüRTINGEN, GERMANY, January 25, 2021 /EINPresswire.com/ — The Corona virus seemed invincible until recently, driving experts around the world to despair. High adaptability, a good dose of unpredictability, as well as massive destructiveness, would best describe this killer virus. A pandemic end was in far distance and the society at the despair. Should this dilemma with daily deaths, social and economic consequences continue, or do we finally need a solution, thought the genetics and mitochondrial researcher, Sandro Zumpe and examined day and night all possibilities for finding the main weak point of the SARS-CoV-2 virus, in order to eliminate it eliminate it once and for all. After many hours of research, he has now succeeded.

But let's start from the beginning:

Is the corona virus a mixed virus?

Until now, it was assumed that SARS-CoV-2, was a B-lineage beta corona virus, with zoonotic evolutionary origins. Sandro Zumpe found in his research, based on observations of the RdRp mutations, ORF protein mutations of the virus, that here is a "mixed virus", from a mitovirus (family Narnavirus) and the beta coronavirus. This therefore has a zoonotic/fungunotic origin. This also explains its strong mitochondrial relationship, with regard to its signaling pathways, which are also strongly oncological. Present findings may in the future imply a re-categorization of coronaviruses and accompanying reclassifications into mitocorona (™)- or even oncocoronaviruses (™).

Clever maneuvers in the human body. What is the virus's plan?

The corona virus proceeds very tactically in the body, manipulating important signaling pathways, setting up small biological control centers and bypassing via evasive pathways and its own, organic restructuring, substance influences, as well as attempts to take away or also add biological units, as well as knockout's of smaller structures and molecular mechanisms. Thereby the following:

1. Ca2+ : The virus acts on Ca2+ regulated processes and thus strongly affects mitochondrially supplied tissues, such as myomiR (muscle-specific miRNA) in cardiac tissue.
As a consequence of intramitochondrial Ca2+ increase due to viral infection, this negatively affects the TCA cycle, OXPHOS, and RC and results in higher ATP output. In the course of this, there is a permanent opening of the MPTP, osmotic swelling, rupture of the outer membrane (OMM), release of cytochrome C, pro-apoptotic signaling molecules, impairment of autophagy and possible cell death.

2. Glucose metabolism: SARS-CoV-2 models this to ensure its survival. For this it uses Aldolase A/C with the side effect to reduce ATP and to model the "3'-UTR of light neurofilament mRNA" expressed in neural cells and its stability in the duel with the poly A protein. Aldolase A functions synergistically with GAPDH this binding to MyHC. (MyHC regulates myosin ATPase activity, which varies from muscle to muscle (Barany, 1967)).

3. Auto/mitophagy processes of the mito's: The virus attacks these resulting in downregulation of the immune system and consequent increased mitochondrial production of ROS. Likewise, NS4A releases cytochrome-C from the mitochondria into the cytosol.

4. RBP's : These "RNA-binding-proteins" are targeted and misdirected by the virus.

5. ORF protein: This protein, present in the corona virus, binds to the two important structures FAD/NAD, which are crucial for the respiratory chain and as electron carriers. A corresponding impairment, has a damaging effect on the ETC and the IMM.

6. PNPase: Dysfunction of PNPase by SARS-CoV-2 leads to escape of mtdsRNA from the double membrane compartments of mitochondria. Also, this leads, to disruption of import of RNA into mitochondria, dysregulation of RNase MRP and RNase P complexes and negative effect on TOM and TIM complexes.

7. MitomiR's: one of the main targets of viral infection, as important tasks such as TCA, ETC, lipid metabolism and amino acid metabolism occur here. In addition, they control important gene functions. Together with miRNA, both target mRNA.

8. Microglia: Corona virus has a neurovirulent effect on microglia (immune cell in the brain). It causes a decrease in Treg recruitment, which results in poor activation of T cells. Also an influence on the immune privilege, MHC 1 /2 complexes, IGF 1 and BDNF take place. Also the communication medium ATP, which microglia cell and astrocytes use among themselves is a point of attack.

10. RNAi pathway: SARS-CoV-2 inhibits this. What was previously known only from plants, namely the attempt that these siRNA use to destroy virus RNA, is now also taking place in the body.

11. Kidins220/ARMS protein: The mutation (N 501Y) in which the virus exchanges asparagine for tyrosine affects the Kidins220/ARMS protein. This is found in nerve cells and interacts with microtubules/actin and plays a role in signal transduction. There is also an influence on the immunoreceptor ITAM, and concomitantly on B cells and their B cell receptor BCR. With high probability, the ERK cascade is also turned on, with effects on MAP kinases and the triggering of strong proliferation, manipulation of mitogenic (PWM) superantigens (MHC-APC T cell receptor). These then in turn have effects on tyrosine kinase (RTK) and EGF receptor.

12. NK cells: In previous publications, the researcher, Sandro Zumpe, has already pointed out the crucial part of NK cells in corona infection.
Furthermore, he found that they are affected by the protein trail and a depletion of them makes the cell "tamer", they lose the ability for autophagocytosis, associated with an intracellular degradation of viruses is disturbed with the result of faulty antigen presentation of MHC 1 and 2 by the virus.

The virus plays PING-PONG with our genes and uses jumping genes and nano rafts for its journey in the body!

During his investigations, the researcher also discovered the multiple possibilities of the virus for its mode of movement/communication in the body and the corresponding means it uses for this purpose. This uses exosomes and accompanying nano rafts for cell communication, through the "exosome pathway" and "lipid rafts" also to get from cell to cell.
Ago proteins are also used to aid communication. For faster progress, he also borrows "transposons" (jumping genes) once in a while, also to make genetic adaptations, an important one being the adaptation of V(D)J recombination (immune system). Furthermore, it achieves control of transposons via piRNA, which allows it to inherit via "spermatogenesis".

The explored main axis of the SARS-CoV-2 virus: This is how it controls all actions-Here lies the key!

The researcher found out that SARS-CoV-2 forms a kind of "genetic main axis" in order to be able to take over most important functions in the body. In doing so, it places its information in IncRNA, the heart of the axis, from which it controls all other RNA. The IncRNA serves to control essential processes such as the MAPK pathway, the RAS protein (oncogene), which can mutate, is important for immune function (B cells), the COX-2 enzyme and regulates PTGS2. It also directs the FOXO pathway, responsible for glucose metabolism cell cycle apoptosis and the PI3K/AKT/mTor pathway, and AMPK with it. Crucially, it also acts as a miRNA sponge together with circRNA (Cdr1as) and models their signaling molecules.

At the same time destinations of IncRNA are: IncRNA acts as a miRNA sponge that indirectly depresses the expression of an mRNA that would be targeted by it. It can also model the translation of an mRNA by binding to ribosomes or mRNA transcripts during translation. The stability of these, it can also influence besides.

Further determination of miRNA: Pre-named "downregulate target expression" of mRNA by binding to 3' UTR (5' UTR) sequence of these. (Marchi et. al., 2013). Up-regulation occurs via the GRSF1 protein. (Disrupted by virus!) Also disrupted is the GRSF1 complex and miR-G located within it.

MiRNA sponge/ceRNA sponge: SARS-CoV-2 functions as a miRNA sponge. It achieves this, as the researcher also found, through its information occupation of IncRNA/circRNA/ncRNA. In addition, he also found that pre-miRNA, regulated by ceRNA+PTEN network is also used as miRNA sponge and summarily of course binding mRNA. Thus, the virus occupies the most important part, IncRNA with its fundamental information, as it acts as the "main sponge" towards the others.