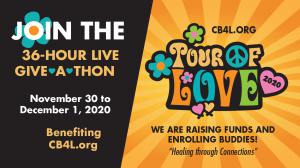 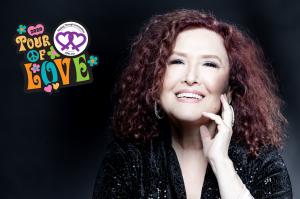 Melissa Manchester Has Joined The Tour of Love 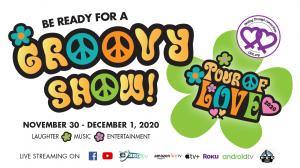 The Tour of Love Changing How Cancer is Done Through Love

It is time for all of us to work together to change the way cancer is done throughout the world, and the Tour of Love is dedicated to do make a difference through the frequency of LOVE. Join us!”
— Tamara L. Hunter

The Tour of Love will be streaming live on the e360tv Platform to Change the Way Cancer is Done Throughout the World by Healing Through Connections within The Buddies Network.

Tuesday, December 1, 2020 The Tour of Love will be Streaming Live. The next “Jerry Lewis Telethon,” this is the third year that the 501c3 “CB4L.org” Chemo Buddies for Life will be taking to the world the message that no one affected by cancer should face it alone. Now including those affected by COVID, this is a message that is timely.

The Tour of Love will offer 36 hours of programming to entertain, educate and inspire all while raising funds, and enrolling “buddies.” Airing on e360tv Live (also distributed on Apple TV, Amazon Fire, Roku, Android TV, YouTube, Facebook and Mobile), the Tour of Love will also be available with a one-hour delay on IGTV, Pinterest, LinkedIn and Twitter. In total, these platforms will enable the Tour of Love to have a reach of 80 million worldwide.

The Tour of Love will be hosted for a third straight year by President & Co-founder of CB4L.org Tamara L. Hunter, a Multiple Award-Winning Humanitarian including First Global Next Impactor, Number One Bestselling Author, and Host of the popular “Service Hero Show.” Hunter is committed to once again be Live the full thirty-six hours back to back. Tamara L. Hunter promises, "I will be back every 'Giving Tuesday,' year after year, until we have changed how cancer is done throughout the world."

THE STARS ARE COMING OUT TO SUPPORT:

Joining Tamara L. Hunter will be multiple stars and thought leaders as Co-Hosts, including Grammy Award Winning Singer-Songwriter Actress Melissa Manchester – who will co-host hour 34 of the Tour of Love. Melissa Manchester’s tremendously successful solo career brought her critical and commercial acclaim. The “Midnight Blue” singer received her first Grammy nomination for Best Pop Female Vocal Performance in 1979 for the Peter Allen/Carole Bayer Sager-penned “Don’t Cry Out Loud,” winning the Grammy in that category four years later for “You Should Hear How She Talks About You.”

Manchester has also had her songs recorded by Barbra Streisand, Roberta Flack, Dusty Springfield, Alison Krauss, Kenny Loggins and many others. Two songs she performed, “Through the Eyes of Love” and “The Promise,” were nominated for Oscars in the same year. She has written tunes for several other films, including The Great Mouse Detective, Lady and the Tramp II, Dirty Girl, and Tyler Perry’s For Colored Girls. During the thirty-fourth hour of the event on Giving Tuesday, December 1 at 9 pm Pacific, (12 am Eastern on December 2), Melissa Manchester and Tamara L. Hunter will be taking the “Tour of Love” through some of her fans’ favorite songs.

Other co-hosts joining Tamara L. Hunter for the Tour of Love will be the Founder of Rock Against Trafficking, British Pop Music Producer, Songwriter and Guitarist Gary Miller, and Dani Rocco. Rocco is dedicated to the Veteran Community, Founder of Devoted to a Soldier, Host of “Dose of Did You Know” and “Devoted to a Soldier” Resource Panel. Rocco is a successful business woman and well-known Relationship Expert. Miller and Rocco will be Hunter’s Co-Host on hour number nine taking place Cyber Monday, November 30, 2020 at 8 pm Pacific, 11 pm Eastern.

The Co-Hosts of hour nine are both dedicated to nonprofits. Gary Miller curated and produced “Set Them Free,” the album that established the roots of Rock Against Trafficking. Miller also featured Grammy legends such as Slash, Fergie, Santana, En Vogue, Rob Thomas and Heart singing their favorite songs by Sting & The Police. Miller and Rocco will be sharing the “Love” through the hour and featuring many of the newest singles that Miller is working on for immediate release and upcoming release in 2021.

In addition to singer-songwriter, musician, actress Melissa Manchester, other musical stars joining the Tour of Love include Top Billboard Performers Darryl F. Walker, Greg Manning, Terry Wollman, and Will Donato. The Tour of Love will feature talent from all over the world, ready to make you laugh, including Fran Capo, The Guinness World Record Holder for the Fastest Woman Talker and Comedian, “Scott The Blue Bunny,” talent from the Indiana Improv, Valerie David of The Pink Hulk and more.

CB4L.org is on a global mission to end isolation, fear and depression associated with cancer. The Buddies Network is dedicated to those with all types of cancer in all stages and supports both the patients and those who love them. Tamara L. Hunter, President and Co-founder of Chemo Buddies for Life has said, “Our stand is that those who are facing cancer need to decide what treatment is best for them, be it traditional, alternative, adjunctive. If someone hears those three words, ‘you have cancer,’ the next thing they should do is get their own ‘Buddy for Life!’”

Led by Emmy Award Winning Director Skip Thomas, The Tour of Love has many top Directors and Producers from Network Television, PBS, Broadway and Streaming Web tv Platforms. The show is being produced with COVID Social Distancing protocols in place, bringing the best entertainment, education and inspiration from all corners of the world together LIVE for thirty-six straight hours.

It is time for all of us to work together to change the way cancer is done, and the “Tour of Love” is dedicated to do make a difference through the frequency of Love. Join the stars, the thought leaders, and those who are sponsoring, volunteering and supporting this cause.

Melissa Manchester Has Joined the Tour of Love