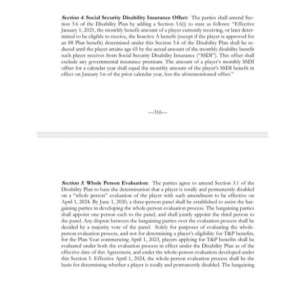 Above is the March 5 Language as voted on by Players. 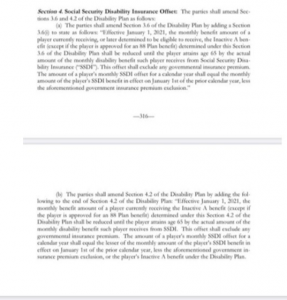 Class Action Filed after 2020 CBA found to be altered.

1. In 2007 Roger Goodell told Congress, including Senator John Kerry and Representative Maxine Waters, “If a player has been determined to be eligible for disability benefits by Social Security, no separate medical assessments will be needed. Instead, the determination of the Social Security Administration will govern the former player’s medical eligibility for NFL disability benefits.”

2. The 2020 CBA: “a Social Security determination of disability does not establish a player’s eligibility for benefits under this Disability Plan.”
Over 400 disabled players and their families have been promised modest disability benefits will continue “for life.”

3. Language was altered in the 2020 NFL CBA after it was signed.

4. The new language and the 2020 CBA illegally reduces benefits to over 400 former players who are permanently disabled as a result of football. These families were promised that the benefits they were receiving would not be reduced and were “for life.”

July 10, 2020 – A lawsuit has been filed in Washington D.C. federal court to compel the NFL's Disability Plan to honor the promises it has made to disabled players and their families. The NFL’s new 2020 collective bargaining agreement (CBA) breaks promises made to disabled players.
The Complaint was filed by R. Joseph Barton, Partner and Chair of the Employee Benefits practice at Block & Leviton LLP (), Attorney Paul M. Secunda a prominent scholar, ERISA and class action attorney, and Partner at Walcheske & Luzi, LLC , and athlete advocate and sports attorney, Ray Genco of Genco Law.

This filing addresses an issue that gained national attention earlier this summer, when it was widely reported that the 2020 collective bargaining agreement given to the NFL players for a vote, was significantly altered after the players voted.
Attorney Secunda stated “It is elemental in sports that you do not change the rules of the game in the middle of the game. Yet that is exactly what the NFL and NFLPA did to its most vulnerable members. By reducing total and permanent disability for the most severely injured players after they had already been receiving those benefits for years is inhumane and displays the height of greed. Thankfully, not only is what the NFL and NFLPA are doing to these disabled former players morally repugnant, but it is also very much illegal under federal employee benefits law and federal labor law. I will not rest until these disabled former players receive the justice they so urgently deserve.”

Attached is a simple, yet blunt comparison showing the changes made after the players voted. These changes drastically reduced the benefits to currently disabled former NFL players.

Attorney Ray Genco , who routinely represents athletes in asserting and protecting their rights, says, “I’m in awe of the grace, perseverance, and courage demonstrated by my clients in this case, and all of the hundreds of families being taken advantage of here. They each are totally and permanently disabled as a result of playing football, and each has been promised modest disability benefits for life. Not only are Defendants attempting to unlawfully break that promise, but have attempted to do so by secretly adding language to a previously signed contract. In all of my experience, I’ve never heard of new terms being snuck into a contract after the contract was signed, it's simply not done, not for any reason whatsoever, full stop. In this case not only did I find added language, but the added language was planted for the sole purpose of stripping disabled people of basic benefits. I was shocked at what I saw when I first discovered it- and remain shocked. This added term, reduced disabled player's monthly checks, and saved defendants about point zero, zero, zero, zero, 4 % of the CBA's projected worth. I can’t explain it, and it seems the PA can’t either, so here we are. I’m excited to bring these facts to a federal judge and demonstrate what is being done to over 400 sports legends.”
###