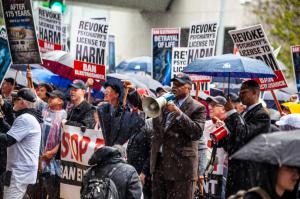 Watchdog wants the use of “date rape” drug, ketamine, that can cause aggression and unconsciousness, banned in restraint use, following death of 23-year-old African American

Watchdog wants the use of “date rape” drug, ketamine, that can cause aggression and unconsciousness, banned in restraint use following death of African American

LOS ANGELES, CALIFORNIA, UNITED STATES, July 7, 2020 /EINPresswire.com/ — In a series of calls for government reforms to prevent institutional racism, the mental health industry watchdog Citizens Commission on Human Rights International (CCHR) called for a ban on enforced psychotropic drugging by paramedics or other medical personnel during police arrests. Rev. Fred Shaw, a spokesperson for CCHR, Executive Director of the NAACP Inglewood-South Bay branch, and former LAPD Deputy Sheriff, has written to the Colorado Governor Jared Polis and state attorney general Phil Weiser detailing concerns over the use of the controversial and powerful drug, ketamine, that was injected into African American, Elijah McClain, 23, during a police restraint in Aurora, Colorado in August 2019. Governor Polis recently issued an Executive Order reopening an investigation into the case.

During the restraint, Elijah struggled and cried, “I just can’t breathe correctly.” He had a heart attack on the way to the hospital and was declared brain dead.[1] Six days later, his family took him off life support and he died.[2] While a coroner could not determine the cause of death at the time, he noted that “an idiosyncratic drug reaction (unexpected reaction to a drug even at a therapeutic level) cannot be ruled out” in reference to the ketamine dosage.[3]

Ketamine is Food and Drug Administration-approved as an anesthetic agent for surgical procedures. Abused on the streets, it is known as a “date rape” drug because it causes disassociation; rape victims injected with it enter a state in which they feel as if their mind and body aren’t connected.[4] Because it also causes amnesia, you may not remember an assault the next day.[5]

While ketamine is used to sedate aggressive patients in emergency hospital room settings, this is prescribed off-label (not FDA approved).[6] Medical News Today reports that victims of ketamine “may lose consciousness or be confused and compliant.”[7]

In some cases, the drug has caused heart or breathing failure and required those injected to be revived or intubated. It was given to Elijah despite “the immediate effects on breathing and heart function that the drug induces.”[8]

Other health hazards and side effects of ketamine, even in low doses, include agitation and in higher doses, “violent behavior,” “severe anxiety, fear, panic, anxiety, exaggerated strength, and aggression, muscle rigidity, respiratory depression,” and more.[9]

Despite these aggression-causing adverse effects, according to an Aurora Fire Department press release, ketamine is “routinely utilized to reduce agitation” during arrests. One comment allegedly heard in the police body camera footage of Elijah’s restraint suggested the dose of ketamine given him may have been 500 milligrams. That approaches the dose of 700 milligrams that would produce up to 25 minutes of full surgical anesthesia for someone of McClain’s reported weight of 140 pounds.[10]

Elijah had not committed any crime when he was approached by police, nor was he armed. He was on the way home from a convenience store. The police had responded to a 911 caller who had reported a “suspicious person” in a ski mask—a mask his sister later said he wore because he “had anemia and would sometimes get cold.”

Rev. Shaw said, “The combination of the restraint and then being forcibly injected with a ‘date-rape’ psychotropic drug must have been terrifying for this young man. Such ‘medical’ drugs, given involuntarily in a street setting against a person’s will, should surely be investigated as a violation of a person’s constitutional rights and the practice stopped. It is cruel and unusual punishment that the Universal Declaration of Human Rights is supposed to protect us from.”

Neuroscientist Carl Hart, chair of Columbia University’s psychology department, was quoted by ABC News, stating: “Why anyone would be giving ketamine in that circumstance is beyond me. The major problem here is we should never be ordering any medication, and no one should be taking or given it against their will.”[11]

Rev. Shaw said institutional racism may have contributed to the arrest and also merits investigation. He said a eugenics mind-set has been created where African Americans are perceived as “violent” or “criminal.” As Duke Law Journal reported, “Over time, attitudes about eugenics, class, and disability combined to create the policies that led to our current nationwide system of punitive detention.”[12]

Yahoo! News exemplified this thinking, CCHR says, because while Elijah was crying for help, “many others who arrived later… chatted casually as McClain struggled for his final breaths.”[13] That Elijah’s pleas were dismissed as him “just messing around,” appears symptomatic of institutional racism, CCHR says. It has been embedded in the culture since eugenics started.

Rev. Shaw hopes that the effect of stereotyping African Americans will be addressed in any review of the circumstances that lead up to, during and following the death of Elijah, along with the use of a mind-altering drug on him or in any restraint.

CCHR is a mental health watchdog responsible for more than 180 laws that protect patients from damaging psychiatric practices. DONATE to support its work here: https://www.cchrint.org/cchrint-donate/

[10] “One glaring question about the police killing of Elijah McClain,” The Week, 26 June 2020,
https://theweek.com/articles/921867/glaring-question-about-police-killing-elijah-mcclain

[11] “Elijah McClain was injected with ketamine while handcuffed. Some medical experts worry about its use during police calls,” ABC News, 1 July 2020, https://www.nbcnews.com/news/us-news/elijah-mcclain-was-injected-ketamine-while-handcuffed-some-medical-experts-n1232697