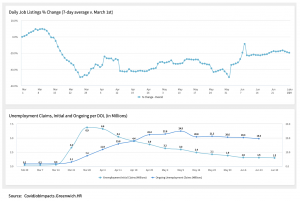 US Hiring Demand and Unemployment Claims

MINNEAPOLIS, MN, UNITED STATES, July 1, 2020 /EINPresswire.com/ — The daily volume of new online job listings increased substantially during June, and this surge indicates that we can expect strong job gains and lower unemployment when the BLS releases its monthly employment report on Friday. This is according to labor market intelligence firm Greenwich.HR.

The pace of job advertising across the US rose 43 percent in June compared to May, as many states began the process of reopening their businesses. According to data from Greenwich.HR, hiring for new jobs is especially strong in the retail sector, where the number of job listings is now exceeding pre-lockdown levels, and in the hospitality sector, which has been steadily improving from the rapid hiring declines experienced in late March.

But, the numbers also point to areas of continuing challenges, and it’s too early to celebrate a jobs recovery. Not all parts of the economy are seeing the same levels of improvement in hiring demand. One example is healthcare, which could be the exception to the good news on Friday. While the number of new jobs being advertised in the healthcare industry overall has climbed , hiring of clinical and allied health workers across all industries continued dropping dramatically.

Employers Are Now Competing For Workers With The Government

Another potential headwind is the impact of unemployment insurance payments. Over 47 million initial unemployment claims have been filed since March. In many cases, these payments can exceed $800 per week, which is more than the wages of most of the new jobs being advertised.

“Over 51 percent of jobs now being advertised pay less than $40 thousand per year,” Says Cary Sparrow, CEO of Greenwich.HR. “Those jobs don’t offer much of an incentive to attract workers as long as unemployment insurance is paying comparable amounts, or more. So, while many companies have now resumed hiring, they may find it much tougher to actually get the workers they need.”