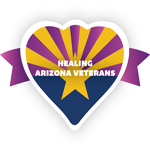 Private donors who wish to help these veterans can do so by donating vehicles and or cash.

Achievements:
Since its establishment in 2017, HAV has raised over $170,000 in private donations. These donations provided treatment for eleven war injured veterans, utilizing HBOT and adjunctive therapies.
Some veterans have completed the treatment and others need additional sessions. The veterans are from various branches of the military and various theaters of deployment: Six served in the Army, three in the Marine Corp and two in the Navy – including a Navy SEAL. Nine of the veterans had served in the current Middle Eastern conflicts and two in the first Gulf war. There are other veterans waiting to be treated, with new potential patients requesting treatment weekly.

About HAV:
HAV was established as a 501c3 charity in 2017. It sponsors the treatment of veterans at two private locations, NorthStar HBOT in Tucson, and HBOT of Arizona in Phoenix. All HAV Board members and staff are volunteers. As such, 98% of all donations are used for treatment.

About HBOT:
HBOT has been shown to be an effective, non-medicinal alternative, both abroad and selectively in the U.S. It is not yet offered as a Veterans Administration benefit. During treatment, patients breathe pure oxygen in a chamber where pressure is 1.5 to 2.2 times normal level. This rejuvenates cells and increases stem cell production that promotes healing. Treat Now, a veterans’ support group, estimates there are 4,200 veterans who have already been treated using HBOT. Arizona passed legislation in 2018 in support of HBOT for TBI and PTSD. It was the fifth State to do so. Three others have joined since then for a total of eight States.

Additional information can be found at http://www.healingarizonaveterans.org/