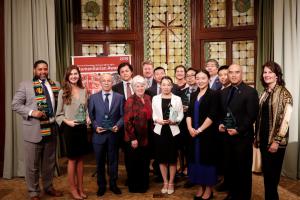 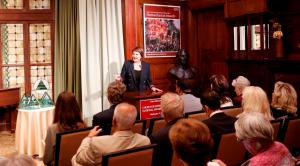 Ms. Kristina Arriaga, Commissioner on the US Commission on International Religious Freedom praises the brave advocates for ethnic and religious freedom in China. 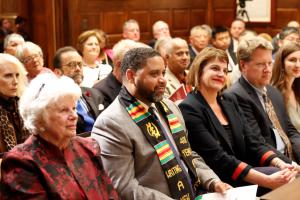 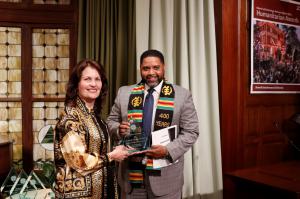 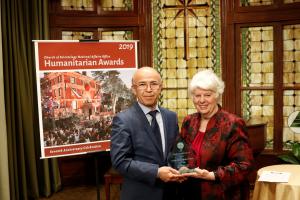 We are at the cusp of a great movement. For the first time civil society and governments alike in the US and around world are standing together to right these wrongs. This is the good news!”
— Rev. Susan Taylor

WASHINGTON, DC, USA, October 16, 2019 /EINPresswire.com/ — The Church of Scientology bestowed its annual humanitarian awards during the celebration of the seventh anniversary of its National Affairs Office in Washington, DC. Five human rights groups comprising the Coalition to Advance Religious Freedom in China working group were presented humanitarian awards in honor of their service in working to solve some of humanity’s most challenging problems. Dr. Joseph L. Green, Jr., Chairman of the Congressional Commission on the 400 Years of African American History was awarded for his leadership in achieving the purpose of the Commission to observe this important American milestone.

Commissioner Kristina Arriaga, of the US Commission on International Religious Freedom spoke about her passion for religious freedom and the need to support groups working to expose abuses of those freedoms around the world. Ms. Arriaga spoke about the courage needed by these awardees to speak up despite threats to their families, themselves, and their livelihoods. In addition to her work on the Commission, she has served as Advisor to the US delegation to the United Nations Human Rights Commission and appointee to the Civil Rights Commission,

The subject of International Religious Freedom has been highlighted in the media lately but many are not aware of its worldwide impact and how the support of religious freedom will bring about more peace, economic growth, and national security.

Each of the organizations honored have members who are suffering abuses in China such as arrests, detentions, confinement in “re-education” camps, and having their children taken away. Some have been able to escape to various countries including the United States and raise the alarm.

China Aid, accepted by Logan Carmichael, Director of Advocacy for China Aid and the Chair of the Coalition to Advance Religious Freedom in China. Ms. Carmichael spoke about their work in supporting Christians and minorities in China. Many Christian “house churches” are closed and the pastors are arrested for “holding an illegal meeting” and usually jailed.

Church of Almighty God, accepted by Ms. Shirley Fan, an escaped Chinese member. This church may be new but they have millions of members in China and around the world and seek to be able to exist and practice their faith. Many of their members have been jailed for attending their church.

The Falun Dafa Association of Washington, DC, accepted by Mr. Sean Lin. Mr. Lin is the Director of Communications and told the crowd about the hundreds of Falun Gong practitioners who have been jailed, tortured, and/or died in prison solely due to their spiritual practices and beliefs.

Dr. Joseph L. Green, Jr. was awarded for his work to bring to light the long history of resilience and cultural contributions from the African-American community, as well as the unvarnished truth about slavery and discrimination.

Dr. Green is the Chairman of the Congressional Commission on the 400 years of African American History. The Commission brings to light the legacy of African Americans starting all the way back in 1619 when the first Africans landed in the British colony of Jamestown. Records of the time show a group of enslaved Africans arrived as property in Port Comfort, Virginia, now the Fort Monroe National Monument, starting the long and often uncomfortable history of African Americans.

The 15-member commission was established on January 8, 2018, to coordinate the 400th anniversary of the arrival of the first enslaved Africans in the English colonies. The commission includes Mr. Lonnie G. Bunch III, Founding Director of the Smithsonian National Museum of African American History and Culture and current Secretary of the Smithsonian Institute.

Dr. Green has spoken at the United Nations, at the US Capitol, and at the Congressional Black Caucus Foundation Annual Legislative Conference among many other actions to raise awareness of this important and historic milestone.

During the ceremony, Rev. Susan Taylor from the Church of Scientology said, “We are at the cusp of a great movement. For the first time civil society and governments alike in the US and around world are standing together to right these wrongs. This is incredible. This is the good news!”

Inspired by the words of humanitarian, L. Ron Hubbard, “A being is only as valuable as he can serve others,” these awards recognize exemplary leadership and achievement in the humanitarian sector. Beth Akiyama, the Executive Director of the Church of Scientology National Affairs Office said, “These individuals have each demonstrated that each individual can make a difference and that working together, we can overcome the seemingly insurmountable challenges facing us today in a world with too much violence, suffering, and injustice and bring about a better world.” Each of the awardees has spent years working for individual rights and protections.

The office is housed in the Fraser Mansion, which was acquired by the Church of Scientology in 1994 to serve as the home to the Church of Scientology of Washington, DC, now located in expanded quarters on 16th Street Northwest’s historic Church Row. The mansion, dating from 1890, is a nationally registered historic landmark. Under the Church’s custodianship, the combination Beaux-Arts, Renaissance and Romanesque building was meticulously restored to its original glory, including the completion this summer of a major historic renovation of its roof. Fraser Mansion also stands just two blocks from the history Founding Church of Scientology at 1812 19th Street NW, established in 1955 by Founder L. Ron Hubbard.

For more information on religious freedom issues go to: http://www.scientologyreligion.org