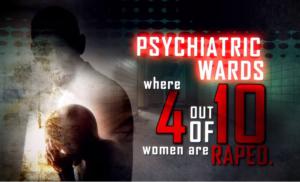 Psychiatrists themselves indicate that 65 percent of their new patients inform them of previous psychiatrists who have sexually abused them.

The Citizens Commission on Human Rights is a non-profit mental health watchdog dedicated to the eradication of abuses committed under the guise of mental health. 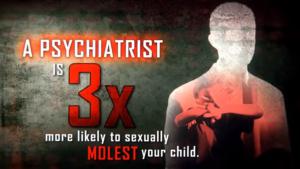 A U.S. national survey of therapist-client sex involving minors also revealed one out of 20 clients who had been sexually abused by their therapist was a minor, with girls as young as three and boys as young as seven.

The Florida chapter of CCHR is a non-profit mental health watchdog dedicated to the protection of children.

Sexual crimes committed by psychiatrists are estimated at 37 times greater than rapes occurring in the general community.

CCHR has documented systemic patient sexual abuse in for-profit psychiatric-behavioral hospitals, including 21 incidents of patients being sexually assaulted in one chain of behavioral facilities.”
— Citizens Commission on Human Rights

CLEARWATER, FLORIDA, UNITED STATES, October 15, 2019 /EINPresswire.com/ — Polk County Florida psychiatrist, Robert Joseph Morgenthal, pled no contest to the charge of sexual misconduct with a patient earlier this month, a third degree felony, and was sentenced to time served in jail, 24 months of probation and prohibited from serving in any capacity in the medical field.[1] Unfortunately this type of crime is an all too common occurrence with studies showing an average of 6 to 10 percent of psychiatrists and psychologists have sexually abused their patients, including children as young as three.[2]

The Citizens Commission on Human Rights (CCHR), a watchdog organization that investigates and exposes abuse within the mental health industry, further reports that sexual crimes committed by psychiatrists are estimated at 37 times greater than rapes occurring in the general community and is calling for stronger penalties and laws passed in the remaining states.[3]

In recent years CCHR has documented systemic patient sexual abuse in for-profit psychiatric-behavioral hospitals, including 21 incidents of patients being sexually assaulted in one chain of behavioral facilities.

• Two hospital staff were convicted and jailed for a combined 35 years over the sexual abuse of residents and two facilities closed down in the wake of sexual abuse incidents and other allegations. [4]
• A hospital staff member pleaded guilty to sexual abuse and was placed on the state’s convicted sex offender registry. [5]
• A mental health technician was sentenced to 25 years in prison for sexually abusing six girls at a Girls Juvenile Residential Facility in Florida. [6]

Additionally, in a U.S. survey of psychiatrist-patient sex, 73 percent of psychiatrists who admitted they had sexual contact with their patients claimed it was committed in the name of "love" or "pleasure"; 19 percent said it was to "enhance the patient's self-esteem" or provide a "restitutive emotional experience for the patient," while others said it was merely a "judgment lapse."[7]

CCHR has successfully worked to obtain laws that ensure psychiatrists, psychologists, psychotherapists and behavioral counselors are not above the law and today there are 32 criminal statutes in the U.S. that protect patients from therapist sexual assault. While CCHR wants to see stronger penalties and laws passed in the remaining states, the organization also wants medical schools and colleges that trained psychiatrists and psychologists, who are supposed to know better than to sexually abuse patients but yet believe they have the license to violate this, to equally share in the burden of legal responsibility.

CCHR encourages anyone who has knowledge of a psychiatrist, psychologist or psychotherapist sexually abusing patients to please report this abuse in confidence to CCHR and to sign a petition calling for uniform laws to prosecute sexual assault of mental health patients. For more information visit www.cchrflorida.org or call 727-442-8820.

About CCHR: Initially established by the Church of Scientology and renowned psychiatrist Dr. Thomas Szasz in 1969, CCHR’s mission is to eradicate abuses committed under the guise of mental health and enact patient and consumer protections. L. Ron Hubbard, founder of Scientology, first brought psychiatric imprisonment to wide public notice: “Thousands and thousands are seized without process of law, every week, over the ‘free world’ tortured, castrated, killed. All in the name of ‘mental health,’” he wrote in March 1969.

Who Commits More Healthcare Fraud and Abuse? – ‘The Quiz’ – CCHR