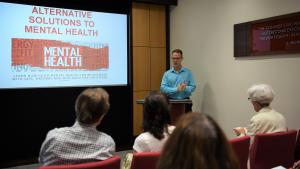 Dr. Nedd delivering a seminar at the CCHR Florida headquarters in downtown Clearwater. He will deliver a seminar on the safe, alternatives to psychotropic medication on September 4th.

Parents are not being told the dangers associated with these drugs. Lacking information they may too easily give permission and regret it much later.”
— Diane Stein, President CCHR Florida

CLEARWATER, FLORIDA, USA, August 15, 2019 /EINPresswire.com/ — With mounting evidence of the addictive and harmful effects of anti-depressants and other psychiatric drugs, the Florida chapter of the Citizens Commission on Human Rights (CCHR) will host a free seminar on safe alternatives to psychotropic medication. The free, public seminar will be delivered by Dr. Stephen Nedd on September 4th at 6:30 pm at the CCHR Florida headquarters in downtown Clearwater.

“Our workshops are educating Floridians on everything from their rights under the mental health laws to the fact that there are hundreds of physical ailments which mimic mental health conditions,” said Diane Stein, President CCHR Florida.

Dr. Nedd, graduated in 1989 from Logan College of Chiropractic, is a Diplomate of the American Chiropractic Board of Physicians with certification for specialties such as, Applied Kinesiology, Acupuncture, Cold Laser Therapy, Physiotherapy and Clinical Nutrition. Through his training, he recognizes factors that can mimic ADD/ADHD and other mental diagnoses causing patients to be prescribed drugs for “mental” symptoms which may actually be stemming from physical causes. Using his medical expertise, Dr. Nedd recommends natural methods as alternatives to treat both physical and mental illnesses.

More than 8.5 million U.S. children are taking psychotropic medications with documented, adverse health effects, according to data from the IMS Health Vector One National Database Year 2013 [1]. This database includes evidences collected from 274,000 infants and 370,000 toddlers. Anti-anxiety, anti-depressant and ADHD drugs were prescribed and administered to 1,400 infants in 2013 according to data from the IMS Institute for Healthcare Informatics [2].

“Parents are not being told the dangers associated with these drugs,” said Stein. “Lacking information they may too easily give permission and regret it much later.”

Initially established by the Church of Scientology and renowned psychiatrist Dr. Thomas Szasz in 1969, CCHR’s mission is to eradicate abuses committed under the guise of mental health and enact patient and consumer protections. It was L. Ron Hubbard, the founder of Scientology, who said in March 1969, "Thousands and thousands are seized without process of law, every week, over the ‘free world’ tortured, castrated, killed. All in the name of ‘mental health.’” For more information visit, www.cchrflorida.org