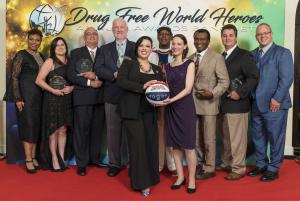 Knowledge is power and at the Foundation for a Drug-Free World, we are working hard every day to empower others with knowledge.”
— Julieta Santagostino,President of the FDFW Fl Chapter

CLEARWATER, FLORIDA, USA, April 18, 2019 /EINPresswire.com/ — On Saturday evening 13 April 2019, the Foundation for a Drug-Free World (FDFW) Florida chapter held its 3rd Annual Drug-Free World Heroes Awards Banquet in the auditorium of Clearwater's historic Fort Harrison, shedding light on several unsung heroes and community leaders who battle the effects of drugs everyday. Some 300 people attended from many different organizations all over Tampa Bay and beyond, including law enforcement officers, teachers, pastors, and heads of non-profit organizations.

The event opened with the Boy Scouts of America Troop 313 posting the Colors and the Pinellas Sheriff’s Police Athletic League’s drumline performance.

The President of the FDFW Florida chapter, Julieta Santagostino, was the MC for the evening. She noted that the Center for Disease Control and Prevention (CDC) estimated that in 2017 there were nearly 200 drug overdose deaths a day in the US – that’s about 72,000 a year, which is more than the number of U.S. troops who died in the entire Vietnam War.

Santagostino said, “Drugs don’t discriminate. We’ve seen this clearly in the Opioid epidemic which is destroying lives across all races and socio-economic classes. But the addicts aren’t the only ones suffering. Families are left distraught from the overdose deaths and communities are at the effect of drug crimes, making it a more dangerous environment for everyone.”

The speakers brought this home with their powerful testimonials: Michael DeLeon, founder and CEO of Steered Straight; Dr. Veronica Walters, motivational speaker, author, educator and founder of the Walters Academy for Entrepreneurship in Tampa; and original Harlem “Shake and Bake” Globetrotter, Frank Streety. They spoke of how drugs affected their lives, their decision to do something effective about drugs and how FDFW is helping them with that mission.

Frank Streety was the final speaker and he presented two Harlem Globetrotter basketballs to FDFW for their work in providing true information about drugs.

The first award winner was Pastor Moses Brown, founder of Feeding Our Children Ministries who has included educating children about drugs in his mission for over 30 years. Second was Julio Viera from Puerto Rico who became a police officer in 1996, started delivering drug education and is now a drug education counselor and certified Life Coach. The third winner, Dan Zsido, serves as the Education and Training Director with the National Association of Drug Diversion Investigators. The fourth award winner, Robert Dinkel, a retired major from the Broward Sheriff’s Department, brought The D.A.R.E. drug education program to Broward County. The final award winner was Amy Ronshausen, the Executive Director of Drug Free America Foundation.

Julieta Santagostino wrapped up the evening by reminding the guests about FDFW’s mission: “Knowledge is power and at the Foundation for a Drug-Free World, we are working hard every day to empower others with knowledge. Be it through our educational seminars that are delivered throughout the state or by handing out our Truth About Drugs booklets to thousands at community events, door to door, at parades and even sporting events.” She then invited the audience to volunteer and get the free FDFW materials out into their communities.

Foundation for a Drug-Free World:

The Foundation for a Drug-Free World is a non-profit organization that educates youth and the community on the truth about illicit drugs so they can make the right decision live drug-free. The Church of Scientology is a sponsor of the program making it possible for the foundation to provide educational materials at no cost to educators, law enforcement and the community. It was the founder of the Scientology religious philosophy who said, “Research has demonstrated that the single most destructive element present in our current culture is drugs."