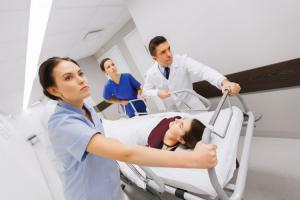 During three decades in medicine, Dr. David Anthony Miranda has traveled the length and breadth of the U.S.

WESTLAKE HILLS, TEXAS, UNITED STATES, September 21, 2018 /EINPresswire.com/ — An experienced medical professional with a drive to care for underserved, predominantly rural populations, it was this desire which led to Dr. David Anthony Miranda's expertise as an emergency locum tenens physician. In almost 30 years, the doctor has spent time in California, New York, Mississippi, Texas, and elsewhere across the U.S.

"As an undergraduate at UCLA, the University of California, Los Angeles, I used to volunteer tutoring science and math to disadvantaged high school students in the, then turbulent South-Central district of the city, exasperated by the recent Rodney King shooting and subsequent riots and looting," reveals Dr. Miranda. “During my summers I volunteered at San Francisco General Hospital working in the Emergency Department, helping its large homeless and indigent population. That’s where I first felt a desire to become an emergency room doctor,” he adds. Later attending medical school in New York City at Cornell University Medical College, followed by a residency at North Shore University Hospital, the doctor then chose to complete his trauma rotations at Lincoln Hospital, the large county hospital in the South Bronx district of New York.

"Located in the crime-ridden South Bronx of the 1990s," says the emergency locum physician, "I found enrichment in taking care of people from economically stressed and medically underserved communities."

Dr. Miranda then took his first job out of residency in South Mississippi, working within rural populations and with strictly limited specialty back-up. "Here, I honed my ability to become independent in practice, and thus a highly self-reliant emergency medical physician," he adds.

In 2008, he was chosen by his employer, a Texas-based provider of Emergency Medicine services that he’d already been working with for two years, to help start their locums division. “Because I was efficient with patient management, dependable with my assignments, and flexible with my schedule, I was the ideal candidate for them to choose to help make the locums division a success,” Dr. Miranda adds.

Having already worked at over ten different emergency departments throughout Central, North, and East Texas, Dr. Miranda went on to further hone his ability to rapidly adapt and overcome, by either starting up new contracts or turning around existing, distressed agreements. Says Dr. Miranda, wrapping up, "this is exactly why I was selected by my prior employer to run their locums division, as it's very much what I do best."

Dr. Miranda’s prior employer has been bought out by a larger emergency medicine group, a pattern of consolidation that’s trending in the industry of Emergency Medicine. He now continues to work part-time traveling to help out small rural emergency departments. “ That’s where the real need is for coverage, the
big cities already have enough doctors wanting to work. It’s the rural communities that are suffering because of Emergency Physician shortage,“ he says.

In addition to practicing Medicine, Dr. David Miranda is also a partner of Fit-Life MD, a physician-owned medical wellness and fitness clinic in San Antonio, Texas. Dr. Miranda's other interests include taking care of his own personal health with daily exercise, investing in the stock market, as well as the clinical teaching of medical students and residents.