How an inferior vena cava filter works to stop blood clots from causing an injury in patients. 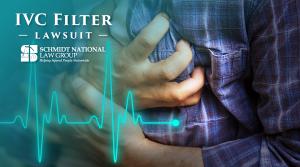 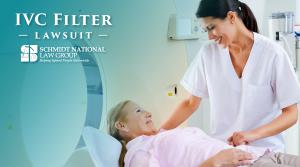 As high as 80% of patients are discovering an injury caused by the IVC filter after a CT Scan.

Problems are being reported to the FDA, and the FDA has issued warnings and taken products off the market, but that doesn’t really help the person who has the implants.”
— Martin Schmidt, Esq

Bard faces roughly 3,600 lawsuits over its IVC filters, which plaintiffs say caused them serious injury and, in some cases, death. The lawsuits were consolidated into an MDL in the District of Arizona in 2015. So far, one case has gone to trial, which returned a $3.6 million verdict in favor of the plaintiff in late March. The second case is set for trial beginning May 15.

The plaintiffs in these lawsuits claim Bard’s IVC filters caused them serious injury. They allege the cage-like devices used to trap blood clots broke and fractured, migrated from their original locations, moved into the heart or lungs, or even punctured the vena cava, the body’s largest vein.

Schmidt National Law Group works with clients all over the United States—about 80 percent of the clients who thought their IVC filter was still in place, found they could have life-threatening injuries after visiting the doctor for a CT scan.

IVC filters have been implanted in hundreds of thousands of people in the United States over the last several decades. Bard is one of three major manufacturers; the other two, Cordis Corps. and Cook Medical are also facing thousands of lawsuits in state and federal courts across the country.

Medical devices like the IVC filter are often approved by the Food and Drug Administration without the need for rigorous clinical trials, allowing potentially dangerous products through the regulatory cracks and into the hands and bodies of unsuspecting patients.

There have been a number of IVC filter recalls over the years, which take potentially deadly devices off the market, but what about the patients who already have a faulty filter in their body? Attorney Martin Schmidt, of Schmidt National Law Group, says filing an IVC filter lawsuit is the only way to help patients seek justice and hold medical device manufacturers like C.R. Bard, Cordis, and Cook accountable.

“[IVC filter] problems are being reported to the FDA, and the FDA has issued warnings and taken products off the market, but that doesn’t really help the person who has the implants,” says Schmidt. “The FDA doesn’t provide any remedy whatsoever for the person that was harmed by a device that failed, and the only person who can really help them is a plaintiff attorney who is experienced in dealing with potentially adverse medical devices and drugs.”